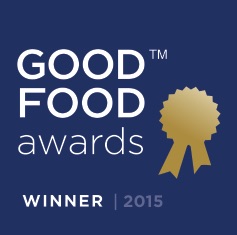 SAN FRANCISCO, CA – For the second year in a row, Real Pickles was awarded a top honor for their Organic Garlic Dill Pickles at the Good Food Awards in San Francisco, hosted by renowned chef Alice Waters. The Good Food Awards highlight outstanding American food producers who are making food that is exceptionally delicious and supports sustainability and social good.

In addition to the pickle honor, Real Pickles’ co-owner Dan Rosenberg was among those selected to address the audience of approximately 400 artisan food producers and other invited guests assembled for the ceremony. In his speech, Rosenberg lauded the Good Food Awards for its efforts to change the way we think about food in the U.S. 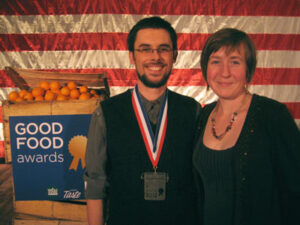 “With its efforts to promote both taste and social responsibility, the Good Food Awards are helping to bring ‘good food’ back into the American diet,” said Rosenberg after the winners had been announced. “Pickles are an essential food – one that can keep people eating nutritious fruits and vegetables from regional sources all year long, regardless of how cold the weather gets.”

As part of the award, Real Pickles was asked to recognize three members of their community who have contributed to the business’ success. Rosenberg acknowledged Atlas Farm and Riverland Farm, two suppliers who grow vegetables for the winning Organic Garlic Dill Pickles, as well as Community Involved in Sustaining Agriculture (CISA) for their work on raising community awareness in western Massachusetts about the benefits of buying local food.

The Good Food Awards are given to artisan producers in five regions of the U.S. in eight categories: beer, charcuterie, cheese, chocolate, coffee, pickles, preserves and spirits.