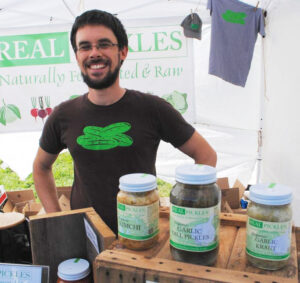 Real Pickles is a worker co-operative working to change the food system by making pickles!  It all started when Dan Rosenberg began making traditional pickles in 1999 after attending a workshop at a Northeast Organic Farming Association conference. Excited about the benefits of locally grown food, he started pickling cabbage, turnips, greens, and other vegetables as a way to eat locally throughout the winter. Dan also got inspired by the work of Dr. Weston A. Price, a researcher who traveled the world in the 1920s and 30s studying the diets of indigenous peoples and who found that those eating traditional diets enjoyed a high level of health completely unknown in industrialized societies.

Dan quickly became devoted to the craft of traditional pickling and, two years later, decided to go into business.  The idea was to create a small company focused on building a better food system.  As one of a tiny handful of businesses producing raw, fermented vegetables, Real Pickles would offer an important and nourishing food that was largely missing from the food system. This new business would also be committed to local/regional food and organic agriculture.  Real Pickles would buy its vegetables only from Northeast organic farms and sell its products only within the Northeast. 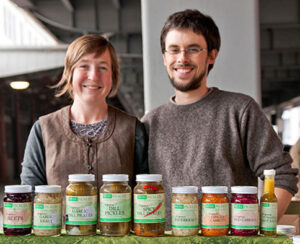 Real Pickles launched in 2001, purchasing 1,000 pounds of certified organic pickling cucumbers from Chamutka Farm, and successfully selling its inaugural batches of Organic Dill Pickles to a couple dozen local stores. The following season, Real Pickles began operating out of the Western Massachusetts Food Processing Center in Greenfield, a business incubator kitchen created to boost the local agricultural economy by providing a venue for making value-added foods with local farm ingredients.  At the Food Processing Center, Dan – soon joined by Addie Rose Holland – was able to steadily grow the business, adding products like Organic Sauerkraut and Organic Ginger Carrots, and expanding sales to stores in the Boston area and then elsewhere around the region.

By 2009, Real Pickles had outgrown the incubator kitchen, and we were ready to make the leap to our own home.  We purchased a century-old industrial building in Greenfield, MA and transformed it into a solar-powered, energy-efficient, organic pickling facility.  The move allowed us to expand significantly, tripling our purchases from local farms in the years following.  We look forward to staying here for many years to come.

Meanwhile, we’ve demonstrated that there is a real and growing demand for raw, fermented vegetables and that a business as deeply committed to social responsibility as ours can work!  In 2013, we turned to preserving our social mission for the long term and – following a successful community investment campaign – took the exciting step of transitioning Real Pickles to a worker co-operative.  We are proud to join the ranks of other co-operatives that are supporting local ownership, workplace democracy, and contributing to the co-operative economy!