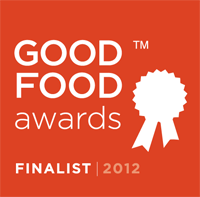 Real Pickles has been named a Finalist in the 2012 Good Food Awards! We captured two of the four spots in the Pickle category for the East region, with both our Organic Garlic Dill Pickles and Organic Red Cabbage chosen as contenders for Winner status. The Good Food Awards, now in its second year, seeks to highlight food producers making food that is “tasty, authentic, and responsibly produced”. Last January, we were honored as a Winner for our Organic Garlic Dill Pickles in a ceremony hosted by renowned restauranteur Alice Waters. In January 2012, we will learn whether we have won a second time!