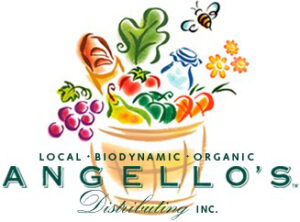 At Real Pickles, we have always had an unconventional approach to distributing our fermented vegetables, choosing to work with small independently-owned regional distributors rather than large national ones.  Angello’s Distributing, based in upstate New York, was the first distributor to carry our products.  I recently talked with Joe Angello, its founder and owner, about his experiences in the natural food industry and what it’s like running a regional distribution business.

KH: Why did you decide to start a food distribution business?

JA: It was a reaction to the consolidation of natural food distribution.  Northeast Cooperatives had just been purchased by UNFI [United Natural Foods] and a clear monopoly was being established.  We were recognizing that good local producers had no access to the market.  The only way was through UNFI and they were more focused on national brands.

I didn’t spend a lot of time on a business plan.  If I did, Angello’s might not have happened.  I’m more of a jump in and do it kind of guy.  I borrowed a truck and was working out of the cooler at Hawthorne Valley Farm.  Later I found space at Clermont Fruit Processors in a building that had been in agricultural use for over eighty years.

JA: We have fifteen staff people, both full and part time.  We run two to four trucks.  Produce wasn’t our original intention but we started the business at the height of the season and within a month it became obvious that people were interested in fresh, local produce.  I came from fifteen or twenty years in the fish business.  Fish is expensive and perishable and the intensity level and competition is high.  Produce can be hard but it’s easier than fish and we really worked on how to make it as fresh as possible.

Produce accounts for about 40% of our sales now.  We also distribute dairy, grass-feed beef, baked goods, fermented foods and some beverages.

Our core customers are independent natural food stores and co-ops in the Hudson Valley, North Jersey and the Berkshires.  What we do resonates with the end user customer.  Shoppers really look for and appreciate good quality organic foods.

JA: One day in the early days of Angello’s I ran into a guy I knew doing a delivery.  He had been the Northeast Cooperatives delivery guy when I had worked at the Hawthorne Valley Farm Store.  He was grumbling about the UNFI purchase and I said, “Come on over. We could use some help”.  It was a rough time in our business.  I think he might have introduced us to Real Pickles.  He definitely introduced us to Paul Harlow at Westminster Organics.  Real Pickles and Angello’s stand for the same thing on different parts of the food chain.  It’s one of the brands we’ve had from the beginning that keeps carrying on, and the relationship keeps get stronger.

KH: What do you see as the biggest challenges for independent and regional food producers and distributors?

JA: Marketing is one of our biggest challenges, both for producers and distributors.  We go head to head with major corporations like General Mills and Kraft Foods, who have an unlimited amount of marketing money.  Most all of these companies are giant publicly traded stock companies.  Is that really where we want our food dollar to go?  Those of us who work in regional food all need to be looking at ways to pool our interests so that we can better promote the independent brands that get passed over by the big guys.

KH: What do we need to be thinking about as consumers and shoppers?

JA: We need more public scrutiny about what’s inside the package.  People like Michael Pollan have been doing that and Vandana Shiva has been doing it on a global level.  We need to make high quality food a priority – for the health of our environment, the health of ourselves, the health of the economy.  The idea that cheaper food is better food is deep in our psyche. That has got to get thrown out the window.

If you spend an extra twenty cents on a six ounce yogurt to buy yogurt from a dairy in your region rather than from a multi-national brand, where is that money circulating?  How is it impacting our society, the environment and where we live? What’s really happening?  These are important questions to ask.

KH: Is there anything else interesting about Angello’s that we might not know?

JA: We care about these issues at the international level too.  We’ve been importing chocolate from the Grenada Chocolate Company.  The chocolate bars are actually made by a cooperative in Grenada.  Extreme things like child labor and slave labor happen in the chocolate industry, particularly in the Ivory Coast which produces 40% of the world’s cocoa supply.  There’s a great documentary called Nothing Like Chocolate that looks at these issues and features the positive things being done by the Grenada Chocolate Company.

KH: What has changed in the industry since you started the business?

JA: When we got started there was not much of a consciousness or awareness of local food.  We didn’t recognize it as a trend. It’s not why we started. For us it was more common sense.  All this stuff is here and you can’t buy it in the stores.  It didn’t make any sense.   We were in the right place at the right time.  There was more awareness starting around 2005.  Banks still had money so we were able to buy our building.  We couldn’t do that now. People started to be really interested in local.  Have you been into a Walmart recently?  Everything says “local”. Banks and insurance companies talk about being local.  It’s like the word “natural”. It gets to be ridiculous.

KH: What should we know about food distribution that we probably don’t know?

JA: What appears at face value to be a simple task of getting a jar of pickles from Greenfield, MA to Clermont, NY to getting to a retail shelf in New York City is extremely complicated.  There are so many ways for that not to happen.  We’ve been doing it well and doing it continuously.

Giant companies have done a good job of keeping their costs at a level that is hard to maintain at a smaller scale like ours.  It’s more difficult than I think people realize.