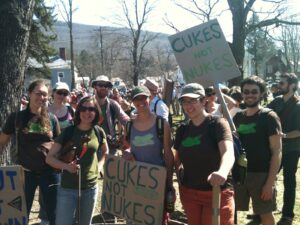 Big corporations are a central part of modern American life: We buy an overwhelming proportion of our goods and services from them, we absorb their advertisements nearly everywhere we go, we invest our retirement savings in them, and we depend on the latest twists and turns in their average stock values to tell us whether our lives are headed in the right direction.  These institutions have brought us many material wonders, to be sure.  But what, we might ask, is their collective impact on our pursuit of loftier goals?  Does the dominance of big corporations in our society, for example, make it harder to achieve sustainability, social justice, or true democracy?  Might it be that such institutions actually put these kinds of social achievements fundamentally out of reach?  If so, what can be done?

In the aftermath of two recent federal court decisions – both, as it happens, ultimately threatening to impact a western Massachusetts food business like Real Pickles – I think these are questions worth exploring.

A couple weeks ago, many of us on the Real Pickles staff traveled to nearby Brattleboro, VT, to protest the continued operation of our neighbor, the Vermont Yankee nuclear power plant.  With our “Cukes Not Nukes!” protest signs, we joined over 1,000 people in marching to the local headquarters of its absentee owner, New Orleans-based Entergy Corporation, where 130 people were then arrested in a non-violent civil disobedience action.

There have long been plenty of good reasons to shut down VT Yankee.  The question of how to responsibly manage its waste seems hopelessly unanswerable, given the million-year duration of its radioactivity.  And, a major failure at the reactor could make a sizable portion of New England uninhabitable for thousands of years.  While such a prospect was real even when VT Yankee first went on-line in 1972, it has become ever more possible as the reactor has grown older and experienced a longer and longer list of mishaps.

In recent months, however, another reason to protest has come to the fore.  And, that is the extreme level of corporate power revealed in the decision-making process about VT Yankee’s future, as well as a corresponding failure of democracy.  VT Yankee’s original 40-year operating license expired on March 21 (the day before the march).  But, unfortunately, rather than now heading toward decommissioning, VT Yankee continues to operate.  Last year, in the midst of an unfolding nuclear disaster in Japan, the federal Nuclear Regulatory Commission (NRC) granted a 20-year license extension, a lucrative prize which Entergy worked for years to obtain.

How could the NRC make such a decision?  After all, VT Yankee is the very same reactor model as those that failed at Fukushima.  Serious problems continue to plague VT Yankee, and the consequences of a major accident there would be profound.  It is difficult to view the result as anything other than the undue influence of a powerful energy corporation faced with the opportunity for massive financial gain.  Perhaps, a “corporate mind-set” was at play, as well – a phenomenon which leads people to have outsized faith in corporations to bring about positive societal outcomes.  I view the corporate mind-set as a consequence of big corporations’ pervasive influence in society.

In January of this year, even more serious questions about democracy were raised when a federal court invalidated the state of Vermont’s decision to deny Entergy permission to continue operating the plant beyond March 21.  The NRC had given its permission, but Entergy had previously signed a contract with Vermont agreeing it also would need the state’s go-ahead to keep the reactor going.  After a long public debate during which it was firmly established that the clear majority of citizens wanted VT Yankee shut down, Vermont’s legislature sided with the citizenry.  But, Entergy sued.  It hired a team of superstar lawyers, spent millions of dollars, and – in a wildly off-base court decision – won.  Vermont has appealed the decision.  For now, however, corporate power has won.  And the inhabitants of New England remain at risk.

Another recent court victory for a big corporation raises many of the same questions as the Vermont Yankee story.  It also hits particularly close to home for an organic food business like ours.  This case involves Monsanto, the world’s biggest marketer of genetically engineered seeds.

Nuclear power is a very risky business, though its risks are fairly well understood.  With genetic engineering, the risks are similarly great.  Yet, it’s hard to even predict all that could go wrong.  The problem is this: our understanding of living organisms is insufficient to warrant messing around with their basic genetic structure in this way.  Living organisms are highly complex.  To think that inserting a fish gene into a tomato will not produce a long list of unforeseen effects is naive and dangerous.  Will new carcinogens or allergens be created?  Will the plants cross-breed with wild plants and then undermine the health of our ecosystems in some unexpected way?  It turns out that such things are already beginning to happen.  To fully understand the impacts of genetic engineering could take decades, by which time it will be far too late to rein in this technology.

It is a serious problem that the federal government has essentially decided that any and all genetically modified organisms (GMOs) are safe and require no testing, raising the question again about the influence of corporate power on our government.  The most recent win for the biotech companies is just as troubling.  Last year, a coalition of organic farmers, seed companies, and advocacy organizations decided to challenge Monsanto for its aggressive actions against farmers whose crops have been contaminated by Monsanto’s GMOs.  The contamination happens when GMO pollen gets carried by wind or insects onto other farms, and then cross-pollinates with non-GMO crops.  Farmers who have never purchased genetically modified seed suddenly find GMO crops growing in their fields.

GMO contamination threatens the existence of organic agriculture – and poses huge threats to all agriculture.  One would expect farmers to have legal recourse against the biotech companies.  After all, these corporations are clearly guilty of “genetic trespass”, robbing farmers of the organic or non-GMO status of their crops.  In actuality, Monsanto has, for years now, been harassing and successfully suing farmers for patent infringement whenever their GMOs are found in those farmers’ fields.  It has made no difference that the farmers neither planted Monsanto’s seeds nor wanted them in their fields in the first place.

In response, the group of farmers, seed companies, and non-profits filed a lawsuit against Monsanto, preemptively seeking protection from patent infringement should the farmers represented ever find their crops contaminated by Monsanto’s GMOs.  Monsanto hired a team of top lawyers and fought back hard. In February, the judge threw out the case, ridiculing the plaintiffs for a “transparent effort to create controversy where none exists.”  The case is now being appealed.  One is again left to wonder about the prospects for a society where corporate influence is so pervasive.

Is there another path?  Is an economy dominated by big corporations the only way?

My opinion is that it’s time to dig out that old classic, Small Is Beautiful: Economics as if People Mattered (1973), and consider the advice of E.F. Schumacher: “Today, we suffer from an almost universal idolatry of giantism.  It is therefore necessary to insist on the virtues of smallness.”  Forty years later, “bigger is better” remains the conventional wisdom.  Yet the evidence tells us that bigger is not always better.  Increasingly, the idolatry of giantism brings us to a place in which profit-driven corporate influence wins the day, regardless of what ordinary people want or need.  If we instead want a society run by the people, many changes are needed.  Among the most essential is a shift from an economy dominated by big corporations to one oriented around small businesses (especially those with democratic structures, like cooperatives).

In a corporate-dominated economy, corporations hold the power.  In an economy predominantly made up of small businesses (even if big businesses still exist), it is possible for people to determine the direction of their lives, and of society.  We are no longer battling the excessive influence of big business on government decision-making processes, nor the pervasive “corporate mind-set”, nor the effects of all that slick advertising.  What happens when businesses misbehave, acting against societal interests?  Small businesses can be held responsible for their actions; in a corporate economy, the big corporations always seem to evade true accountability.  Small businesses are less likely to misbehave in the first place.  Only a huge absentee corporation – headquartered 1,500 miles away and beholden to the financial interests of investors on Wall Street – could possibly fight so hard to keep Vermont Yankee running.

To move to a small business economy, we will need entrepreneurs starting up new small businesses – and keeping them small.  Customers supporting these businesses with their purchases.  Millions moving their money out of the big banks and into community banks.  Investors shifting their money from Wall Street to local and regional enterprises.  Masses of people pushing for political change thru protest movements like Occupy Wall Street.  In other words, we must choose to make use of the people power we do have, however limited it may be.  We will then see that we have what it takes to build a green, socially-just, and democratic society.