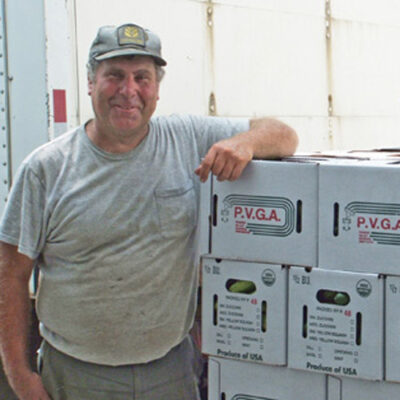 Dave has a long history with pickles. He grew up in South Deerfield, where the Oxford pickle plant (originally the Jewett plant) operated from 1896 to 2006. The Oxford plant was among the largest pickle manufacturers in the Northeast, and served as a primary market for vegetable farmers in the Connecticut River Valley during its years of operation. When he was a kid, Dave’s parents raised a small crop (about 1 1/2 acres) of pickling cucumbers each year for the Oxford plant, as did many of his neighbors. Back then, Oxford paid growers by the number of cucumbers delivered. Dave recalls sitting under the tree as a child, helping his parents to count their freshly-harvested cucumbers. As a teenager, he worked on larger cucumber farms as well as dairies.

Dave started his own farming business in 1980, and bought his current farm just 2 years later. From the beginning, his primary crop was pickling cucumbers, which he sold to the Oxford plant. By the time Dave got into farming for himself, Oxford had begun paying farmers based on weighing and grading of the cucumbers at the plant, so Dave was spared the task of counting each cucumber he harvested! From early on, Dave also specialized in growing tomatoes and winter squash. After farming conventionally for many years, Dave started transitioning to organic in 1998. Now, Dave grows all of his crops certified organically.

Chamutka Farm was the very first supplier to Real Pickles, growing the 1000 pounds of pickling cucumbers we purchased in 2001 to make our first batches of Organic Dill Pickles. Dave continues to this day to be a major source of our two most important vegetables: cucumbers and cabbage. With the Oxford pickle plant now closed, Real Pickles is incredibly fortunate to be able to benefit from Dave’s growing skills and experience as we carry on the pickling tradition in western Massachusetts.