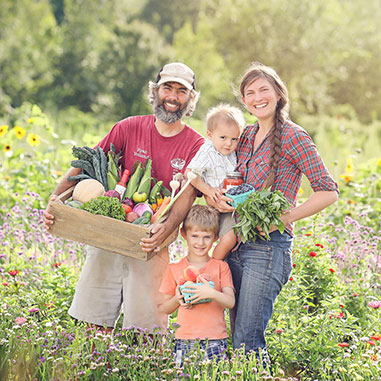 Ryan and Sarah run Red Fire Farm, a successful family farm in Granby and Montague, MA. Started by Ryan in 2001, the farm specializes in a diverse array of certified organic vegetables, fruit, and flowers. Red Fire Farm is well-known throughout western Massachusetts for their high quality produce, which they sell through their Community Supported Agriculture program, farmer’s markets, food co-ops, and their own farm stands in Granby and Montague. They also host a not-to-be-missed Tomato Festival every August at the Granby farm.

Ryan began his farming career back in middle school when he took over his parents’ vegetable garden and opened an organic farm stand at their house in Montague. By the time he was in college, Ryan was already on his way to becoming an experienced grower, as his operation had expanded into an established vegetable farm selling at farmer’s market and wholesale. After graduating from Cornell’s agriculture school in 2000, Ryan purchased an old dairy and potato farm in Granby and began growing his organic vegetables there under the name Red Fire Farm. Now, with many years of experience under his belt, Ryan is a highly skilled grower and, along with his wife Sarah, runs one of the most well-respected organic farms in the area.

In 2009, Ryan and Sarah purchased additional farmland and expanded their farm operations back into Ryan’s hometown of Montague. They acquired 110 acres of rich alluvial soils as well as beautiful greenhouses. They are working with Mount Grace Land Trust to employ an innovative land tenure model, the Campaign for Affordable Farms, that will keep this farmland affordable for farmers into the future.

Red Fire Farm was one of the first farms to supply produce to Real Pickles, and continues to be a key source of high quality, certified organic vegetables for us. And conveniently, Red Fire Farm’s stands in Granby and Montague are great places to pick up a jar of Real Pickles products!

Mark your calendars for the return of The Festival

Thanks for featuring us in this AMAZING raw salad

We are thrilled to introduce you all to TWO MORE m