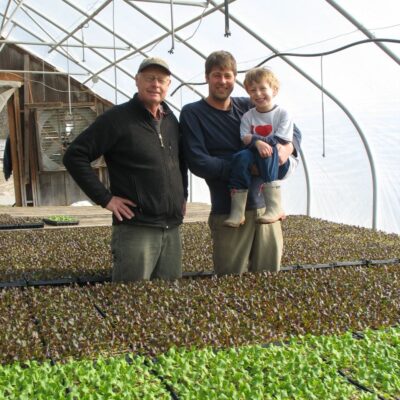 Paul runs Harlow Farm, one of the oldest and largest organic vegetable farms in New England. Based in Westminster, VT, Paul produces a variety of vegetables on his 150-acre farm, and is particularly well-known for his lettuce, beets, carrots, and kale. Paul sells his organic vegetables through local outlets, including area food co-ops and his family’s own Harlow Farmstand in Vermont and at the Boston Public Market; and he also supplies his high quality organic produce to regional wholesale markets.

Harlow Farm has been in operation in Westminster since 1917 when Paul’s grandfather purchased the land. Paul took over the farm in 1974 and, within two years, started experimenting with organic production after observing declines in soil quality on the farm. By 1983, Harlow Farm was entirely organic, making it one of the earliest organic farms in the region. As a long-time organic farmer, Paul has had a significant impact on organic vegetable farming in New England. He has long been dedicated to sharing his knowledge with aspiring organic growers. He was a founder of Deep Root Organic in 1986, the first organic farmer co-operative in New England, which has played an important role in developing markets for organic growers in New England.

Paul is our biggest supplier of beets and carrots and an important source of cabbage and onions as well. Harlow Farm’s reliability and consistently high quality vegetables serve as good reminders that Real Pickles is a clear beneficiary of Paul’s many decades of farming experience.