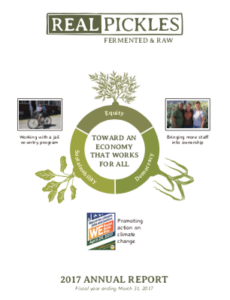 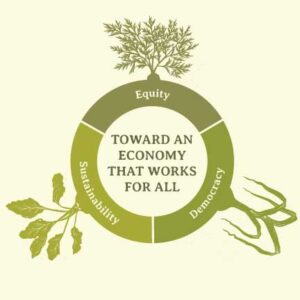 We are committed to offering wages and benefits that meet the cost of living for the entire Real Pickles staff. In FY’14, we set about implementing a multi-year plan to reach this goal, and we’re proud of the progress we’ve made to date.

In January, we began offering a company-sponsored health insurance plan to all staff members working 30+ hours per week. While a major financial commitment for an organization of our size, the worker-owners chose to 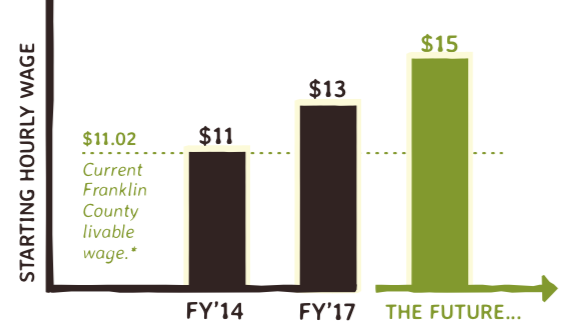 take this step in light of our collective view of health care as a right, not a privilege. We are thrilled to be offering this benefit to our staff.

We increased our base hourly wage to $13

This puts us halfway toward our goal of offering a $15 per hour wage to all entry level staff. Additionally, we joined Business For A Fair Minimum Wage in calling for increases to the Massachusetts minimum wage to reach $15 per hour by 2021. 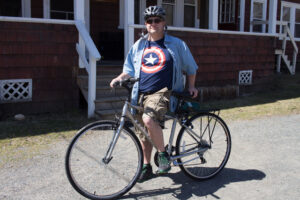 Last summer, we began participation in a re-entry program run by Greenfield’s Franklin County jail, placing soon-to-be-released inmates in jobs with local employers. We hired Russ Lilly to join our kitchen crew, and have found him to be a highly responsible and skilled member of our staff. He was released from jail in April, and we are glad to know that his employment at Real Pickles will be a continued part of his earnest efforts to get his life back on track. As part of a broader re-entry program, he has taken classes at a local community college on agriculture and co-operative business. This is part of a federally-funded initiative that helps inmates transition from jail to community.

We support our employees in caring for their families through our family medical leave benefit, which has been used by six Real Pickles families over the last three years! Parents are able to take three months of leave and receive 20% of their regular pay. Our goal is to increase to 60%. Soon we’ll need a daycare too!

This spring, we surpassed 100,000 kWh in electricity generation from our 17 kW photovoltaic system. Installed in April 2011 by our 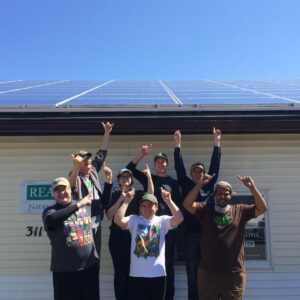 neighbor and fellow worker co-op PV Squared, our 80 solar panels have provided over 75% of our electricity needs since that time. We are especially pleased that 65 tons of carbon dioxide to date have been kept out of the atmosphere thanks to the clean, renewable power generated by the solar array atop the Real Pickles roof!

Pushing for Action on Climate Change

To change everything, we need everyone. The People’s Climate Movement is a broad-based ground-breaking coalition of hundreds of faith-based, labor, indigenous, civil rights and environmental justice groups based around the country working together to build bold solutions that tackle climate change, rooted in economic and racial justice. Real Pickles ran a promotional campaign during spring 2017 to support The People’s Climate Mobilization on April 29, 2017 in Washington DC, and many of us were present in DC and at various locations across the region.

We are delighted to welcome three staff members onto our ownership team! Katie Korby, Lucy Kahn, and Craig King, Jr. are all dedicated members of our staff, and fill important roles in our daily operation. Katie is our fermentation manager and ensures that our products are always the highest quality. Lucy, as part of our production management team, keeps us working efficiently and safely. Craig is a key member of our production team and is also our lead shipper, making sure boxes are delivered to customers intact and on time. We are thrilled that they will help to guide the future of our business!

The Spirit of Co-operation

Real Pickles is featured in a new Visionaries documentary, “In the Spirit of Co-operation: Eight co-ops working to build a better world”. The production team came to Real Pickles during spring 2016 and spent most of a day with us, filming production and discussions between our worker-owners. It is being aired nationally on PBS stations.

Many Real Pickles staff attended the January 2017 Women’s March in several locations across the region, including Greenfield and Boston, MA; Montpelier, VT; and Washington DC! 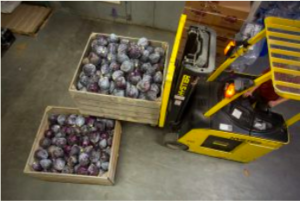 Regional Access is a key part of the supply chain for farmers and small scale producers in the Northeast, distribution wholesome regional food to retailers and restaurants in New York, New Jersey, and Pennsylvania. The late founder, Gary Redmond, will long be remembered not only as a food system visionary but also, within Real Pickles, for his knowledge of cucumber fermentation gleaned from old time New York City pickle makers and from his own experience in commercial fermentation decades before its modern comeback. Now in its 28th year, Regional Access continues to innovate in ways that value transparency and sustainability, and Real Pickles is fortunate to have them as a partner 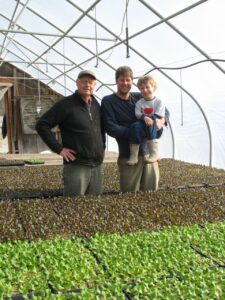 Paul Harlow runs Harlow Farm, one of the oldest and largest organic vegetable farms in New England. Based in Westminster, VT, Paul has farmed organically since 1983 and is particularly well-known for his lettuce, beets, carrots, and kale. As one of the first certified organic farmers in the region, Paul has had a significant impact on organic vegetable farming in New England. He has long been dedicated to sharing his knowledge with aspiring organic growers, including as founder of Deep Root Organic in 1986, the first organic farmer co-operative in New England, which has played an important role in developing markets for organic growers throughout the region.

We are so excited that our brand new label designs are now on store shelves! As we begin our 17th year, we celebrate our deep commitment to the values on which Real Pickles was founded – healthy food, a resilient regional food system, and vibrant local and democratic economies – and we think our new labels reflect this mission. With grant help from Fair Food Fund and Massachusetts Growth Capital Corporation (through Co-operative Fund of New England), we worked locally with Ajitate Design and paper cut artist Emi Lynn Holler to produce these beautiful labels. Look out for them at your local store!